Christina Haack has been through a lot of changes in her near-decade in the spotlight.

The designer first made a name for herself with her first husband, Tarek El Moussa, on “Flip or Flop.” Then her solo show, “Christina on the Coast,” featured her life with her second husband, Ant Anstead (who later became her second ex).

And while it’s hard enough to keep up with her personal life, what her fans might not see is how much her designs have changed, too. 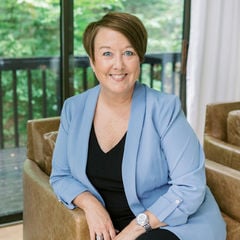 There are many qualities and skills that go into being an excellent real estate professional – integrity, in-depth community and market knowledge, marketing savvy, effective negotiation skills, and a high-quality professional network, all of which are hallmarks of how I work.

That said, in my experience as a real estate professional, I've also found that providing the very best service is essentially about putting my clients first. This means keeping myself accessible, being a good listener as well as a good communicator, and responding quickly to your needs.

This "client first" philosophy has always been my approach and it requires me to continually improve my skills and ways of doing business. In addition, I've found that the latest technologies are enabling me to do everything I've always done, only much more quickly and efficiently. They've also helped me to extend the range of services I provide to my clients.

I have been a resident of Fairfax County since 2001 and have been assisting buyers and sellers achieve their real estate goals in Northern Virginia since 2005. My background includes sales and administrative management as well as 11 years of real estate sales and operations management experience serving top producing teams in Northern Virginia and Montgomery County Maryland.

My military family and I have traveled with the US Navy to Greece, California, Hawaii, Florida, and Virginia. Of all the places we have lived, we love Virginia the best. Ask me why! My husband, of 31 years, serves as a Residence Manager in McLean. We have 3 grown children that all graduated from Herndon High School. In my spare time, I enjoy spending time with family and friends, movies, and a good glass of wine.

Melonie Tibbs and I look forward to serving you and your family!